Non-kinetic-energy (NKE) weapons inflict harm through the emission of different forms of radiation or sound, diffusion of chemical or biological agents or transmission of electricity, rather than the application of kinetic energy possessed by a fragment, bullet or other projectile. NKE weapons include directed-energy weapons (e.g. laser and millimetre-wave weapons), bio-chemical incapacitants and irritants and electrical weapons (e.g. Taser® and acoustic weapons such as the Long Range Acoustic Device – LRAD).

Many of these weapons have been labelled ‘non-lethal’ or ‘less lethal’ and are often claimed to reduce the risk of fatal or serious injury. NKE weapons are used in a range of scenarios and have, in practice, resulted in serious harm, even death. The concern has also been raised that NKE weapons have the potential to subvert traditional methods of law enforcement, lowering the threshold for the use of force.

In May 2010 the Geneva Academy organized an international meeting of experts as an initial step towards reviewing NKE weapons under international law.

This research project was carried out by Stuart Casey-Maslen.

The report Non-Kinetic-Energy Weapons Termed ‘Non-Lethal’: A Preliminary Assessment under International Humanitarian Law and International Human Rights Law was published in October 2010. This monitors the use of NKE weapons under applicable international law on a more systematic basis and reviews relevant international criminal justice standards, in particular the 1990 Basic Principles on the Use of Force and Firearms by Law Enforcement Officials, to ensure they more accurately reflect developments and concerns regarding NKE weapons. 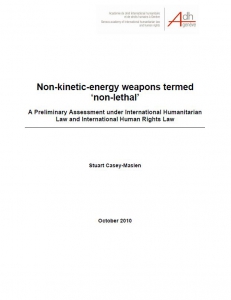