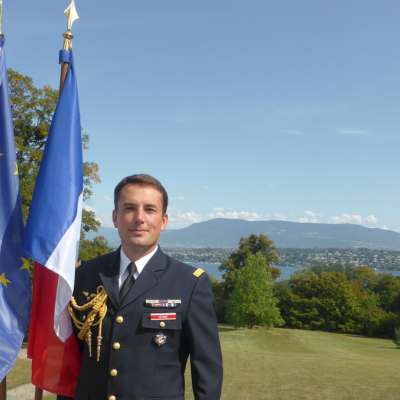 Colonel Pascal Levant has been appointed military advisor of the Permanent mission of France to the Conference on Disarmament in Geneva in August 2018.

Previously, Colonel Pascal Levant Louis served at the General Directorate for International Relations and Strategy of the Ministry of the Armed Forces from 2015 to 2018. He was in charge of export control of military goods and arms control, subjects he also worked on during several months at the Office of the Minister of Defense.

Prior to assuming this position, Colonel Pascal Levant spent three years studying, at the War College from 2014 to 2015, and at the Institute of Political Studies of Paris, from 2010 to 2012. During this period, he had the opportunity to work at the French Embassy in Washington and at the French military representation to the European Union.

In the first part of his career, Colonel Pascal Levant served for more than 10 years as a transport pilot in the Air Force, on C160 Transall and Airbus A400M. He participated in many national and international exercises, missions and operations around the world. He also worked at the French Permanent Joint Headquarters from 2009 to 2010.

Prior to that, Colonel Pascal Levant studied to become an officer, an engineer and a pilot at the French Air Force Academy, from 1997 to 2000.